Traditional or Roth IRA – Which is better?

Should you contribute to a Traditional IRA, or a Roth IRA? This is just one of many questions we may face on the road to financial independence.

Like nearly all of these questions the answer is multi-factorial and depends on your unique set of circumstances. Read on to learn more about the dominant factor in comparing the two options.

In 1997, Congress created the Roth IRA as an additional alternative to the Traditional IRA.

First of all, the basic rules for each:

Unfortunately, one occasionally reads in the popular press that “tax-free” is better than “tax deferred” and then concludes that the Roth is always better. This is not correct.

By far, the dominant variable in determining which account is better is a comparison of current vs. future tax rates.
To illustrate, I’m going to tell you a story, so go ahead and make yourself a cup of tea and find a comfortable chair. I have adapted this story from the now dormant “Bad Money Advice” blog.

Spoiler alert – lots of numbers ahead. It is the nature of my business. If you don’t like math, never fear, just keep reading. I promise there will not be a quiz.

The Story of a Wise and Benevolent Queen

Once upon a time, in a land far far away, there lived queen named Ira-Bella. (Full disclosure, she is my alter ego….)

In the Queendom of Ira-Bella, all the peasants worked for the queen planting wheat. She imposed a 20% tax on each peasant, but, being a wise & benevolent queen she gave them the option of paying the tax at the spring planting or at the fall harvest.

The Traditional peasant decided he would pay his 20% tax at harvest. He got his 10 bags of wheat in the spring, planted it, and it grew 10 fold. In the fall he harvested 100 bags of wheat. He paid the 20% tax (20 bags) and was left with 80 bags of wheat for himself.

And they all lived happily ever after.

OK, I’m not actually a queen (though if I was I would be both wise and benevolent).

The bags of wheat are actually wages (dollars).

The peasants are actually people working for a living (like you and me).

As we see from the story, when tax rates stay the same there is no difference in end wealth between the traditional IRA and the Roth IRA.

This is called the tax-equivalency principle and holds that when tax rates are the same at contribution and distribution there is no difference in end wealth between the traditional IRA and the Roth IRA. 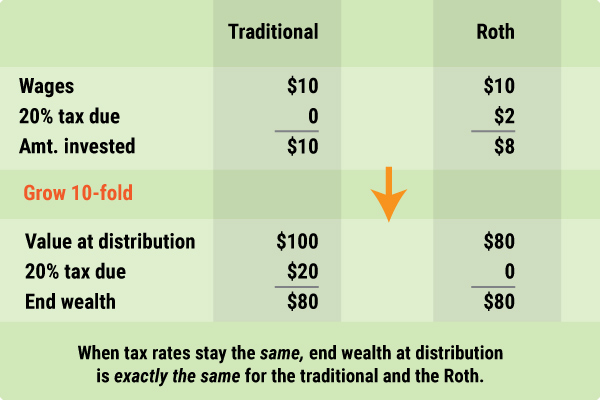 It is important to note that length of time is NOT relevant in this equation. It does not matter if the “wheat” grows for a summer, 2 years, 10 years, or 25 years.

Also, the AMOUNT of growth does not matter. The accounts could grow 2-fold, 5-fold, or 15-fold and the end result is still the same. (You can plug in those numbers if you are so inclined)

But what happens if tax rates change?

This illustration shows what happens when tax rates go down: 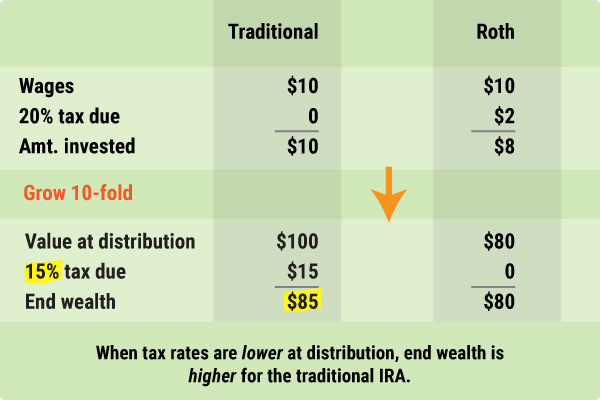 When tax rates go down between contribution and distribution, the end wealth is higher for the traditional IRA.

This illustration shows what happens when tax rates go up: 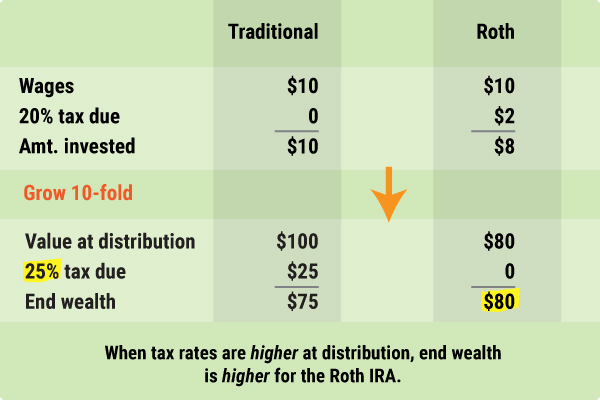 When tax rates go up between contribution and distribution, the end wealth is higher for the Roth IRA.

Another thing to consider is who will be taking the distributions. It may not be you, it may be your heirs. Considering your heirs’ potential future tax rates may be part of this analysis.

The tax equivalency principle also applies to whether or not to make a Roth conversion. (Converting existing pre-tax IRA funds to a Roth and paying the tax now).

The astute reader will note that in each case the AMOUNT of tax paid is higher with the traditional IRA, but this is not relevant. What matters is end wealth.

For many people, taxable income in retirement is lower than it is during their peak earning years resulting in a lower tax rate in retirement. In this case the traditional IRA results in greater end wealth.

OK, about now I can hear you yelling, “Wait just a minute Queen Ira-Bella, of COURSE taxes are going up in the future, we’re running huge deficits, and you need to listen to the news!”

It is certainly true that taxes may go up in the future, but this does not necessarily guarantee a higher income tax rate on IRA withdrawals.

Higher taxes may come in the form of:

All are potential sources of tax revenue that do not incur higher income tax on traditional IRA withdrawals.

Furthermore, IRA withdrawals are generally taken by senior citizens, who, as a group vote in larger numbers than any other age group. It is not hard to imagine that future politicians would try to limit their tax increases.

In summary, Queen Ira-Bella would like to leave you with two major points:

Analyzing future tax rates is, of course, a tricky business and there are many individual variables to account for. None of us has a crystal ball, not even Queen Ira-Bella.

The point is the next time you hear that “Roths are always better”, you can say “Not so fast”.

Special thanks to Michael Kitces, a luminary in my field. I recently had the privilege of hearing him speak on this topic.   If you’d like to get in the weeds and read further about this and the three other (less important) variables in the Traditional vs. Roth decision see here.

Previous Post: « What I Learned about Investing from my Office Light Fixture
Next Post: What is YOUR spending number? »