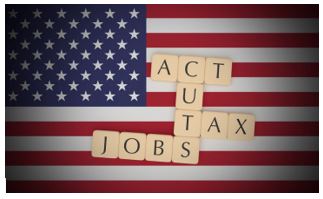 Last December, I went to my annual two day tax education class and sat with several old-timers at lunch. I felt like a whippersnapper next to them.

One of them opined “I remember the Tax Act of 1986” and proceeded to entertain us with stories of fixing mistakes using a quaint cut and paste method with an X-acto knife!

Rule #1: Do not antagonize the person using holding the knife. Yikes!

The most recent major overhaul to the tax code is officially known as the Tax Cuts and Jobs Act of 2017 (TCJA).

I doubt I will be regaling the youngsters with stories about these changes to the tax code 32 years from now – but you never know.

TCJA went into effect for the 2018 tax year.

For most of you, those returns were completed earlier this year. If you filed for an extension, your return is (generally) due on October 15th.

One of the big changes of the TCJA was a cut in the corporate tax rate. This applies broadly to businesses that are set up as “C corporations” which is pretty much every big company that you’ve ever heard of.

To “level the playing field” the TCJA gave many (not all) of these business owners a tax cut called the Qualified Business Income (QBI) Deduction.

The rules for the QBI Deduction are complicated, to put it mildly.

Software writers were working overtime to program the tax software to follow all the rules. Some aspects of the rule were “clarified” at the last possible minute, and some aspects are still not crystal clear.

Some tax programs automatically put the QBI deduction in the return and then it was up to the preparer to remove it if the taxpayer did not meet all the qualifications. This is how my software was set up.

Other tax programs did the opposite: the deduction was not automatically put in and it was up to the preparer to put it in.

Two interactions lead me to believe that the QBI deduction was missed on who knows how many returns.

First, I talked to a woman with her own business at a networking group. She said her return did not have the QBI deduction and when she asked her accountant about it he was very embarrassed and said “oops”. He amended her return putting a chunk of change in her pocket.

Secondly, I was speaking to a tax preparer at a different firm and she lamented missing QBI deduction a couple of times and was grateful that the in-house reviewer found the omission.

Look to the right. Is there a number in Box 9? If not, then I recommend you call your preparer and nicely ask why you did not qualify. There are a million reasons why you might not.

If you did not qualify, ask if there is anything you can do to qualify in the future.

Previous Post: « Are You A Clueless Spouse When It Comes To Finances?
Next Post: The News is Dreary – Should You Still Be in the Stock Market? »