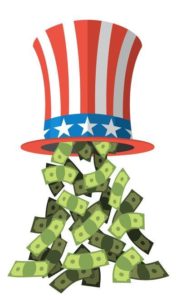 This year I will spend a lot of time with my clients analyzing their individual tax situation under the new law. New withholding tables go into effect in February 2018 and wage earners may have to adjust to make sure they don’t have either a huge refund or a huge bill at tax time. No, you do not want a big refund!

Many people who used to itemize will now take the standard deduction. But it’s difficult to make blanket statements about who will and won’t itemize with the new bill.

Today I compare new vs. old tax laws for two of my clients: a two-earner married couple with young children and a single retiree.

“Jane and John” are a two-earner married couple with two young children.

Jane and John own a home. They itemized in 2016 with itemized deductions for property taxes, state income tax, mortgage interest, and charitable contributions.

They got the child tax credit for their children, but it was limited due to income.

In 2018, under the 2018 law, if everything stayed the same for Jane and John, they would still itemize deductions.**

**In reality, Jane and John will probably not itemize in 2018 because in 2016 they had a large one-time charitable contribution. For the purposes of this apples-to-apples comparison we assume everything the same.

They get a larger child tax credit that is not limited due to income.

2018 income tax bill result for Jane and John, a two-earner couple with 2 young children: A decrease of $650.

“Mary” is a single retiree living on Social Security and IRA distributions.

The taxation of Social Security benefits is calculated based on the amount of other income you have. This does not change under the new law. Currently ≈56% of households receiving Social Security pay tax on some portion (up to 85%) of their benefits.

Mary also had ≈$15,000 of IRA distributions. She had some interest and dividends.

She does not own a home so she does not have mortgage interest or real estate tax deductions. She itemized deductions in 2016, mostly due to significant medical expenses.

2018 income tax bill result for Mary, a single retiree: A small increase of $7.

What will happen to YOUR taxes with the new bill? This year, your best bet is to work with a tax professional to find out.

Previous Post: « The Efficient Market Hypothesis, Your Neighbors, and You
Next Post: Donor Advised Funds – a Tax Efficient Way to Give to Charity. »